Finally, after more than a month, we’ve come to the last item on the editing checklist (for substantive editing anyway) before we move on to mechanics and grammar–everyone’s favorite topic.

Today we’re talking about talking–more commonly known in the literary world as dialogue.

Dialogue hasn’t always been–and still isn’t–one of my strong areas, but it has improved significantly with study and practice. Here’s some of the most useful tips I’ve learned.

How to Edit Dialogue

You won’t find all of the flaws reading your words silently in your head. Read your dialogue out loud to see if it flows. You can even role play with someone else. If you’re old school, you can use a tape recorder so you can record and listen to your words out loud. I use the recorder on my phone. This has helped a lot. Of course, I look really crazy when I do it because I tend to gesture and make weird faces while I do it.

While you read through your book, highlight the dialogue that you want to fix whether it’s a word or the entire sentence. If it sounds off, it probably is. Now that you know it sounds bad, you need to figure out why it’s bad.

Dialogue needs to be two things: Purposeful and Natural

Dialogue, like your characters and events, has to move the plot forward. This doesn’t mean that  your characters have to talk about the conflict all the time, but it means there should be a reason they are talking.

Do you characters ramble, chitty chat, banter, shoot the breeze?

If it can be described as one of the latter or anything synonymous, you should probably cut it.

Get to the point. Skip the “hellos” and “how do you dos” and go straight to the meat of the conversation. See my example of this from Tuesday Tip #20, where I explain how dialogue effects pace.

A typical example of repetition in dialogue is name dropping. Listen to yourself talk. How often do you use someone’s name? You know who you’re talking to, so does your character. If you created unique characters with their own traits, mannerisms, and verbiage, your reader will know who is talking without the name cue.

Another form of repetition is when dialogue repeats what a character just thought or did.

“Why did you toss your shoe, Jack?” Anne asked.

Not only did Anne repeat Jack’s name, but she also repeated the action. The reader knows what Jack did. She could have just said, “Why did you do that?”

Dialogue should sound like real conversation–minus the frequent topic changes, the stuttering, and meandering, of course.

Dialogue often sounds unnatural or contrived when writers try to force a theme or information.

To avoid info dumps in narrative, writers often use dialogue to give away information the reader needs to know; however, beware giving away too much exposition using dialogue. It sounds unnatural and forced.

Example: The Lord of the Rings: The Fellowship of the Ring (movie adaptation)

Arwen: Do you remember when we first met?
Aragorn: I thought I had wandered into a dream.
Arwen: Long years have passed. You did not have the cares you carry now. Do you remember what I told you?
Aragorn: You said you’d bind yourself to me, forsaking the immortal life of your people.
Arwen: And to that I hold. I would rather share one lifetime with you than face all the ages of this world alone. I choose a mortal life.
Aragorn: You cannot give me this.
Arwen: It is mine to give to whom I will. Like my heart.

This is an example of two characters giving away too much detail about a shared memory. This might make more sense if one of them had amnesia or something. Really, a simple yes, would have sufficed as an answer to these questions. They know how they met–they aren’t talking to each other; they’re talking to the viewer.

When you read your character’s words, do they just fall flat. Does it lack emotion? It might be the tone. If your dialogue is too formal, use contractions. There are still those who believe that contractions are not allowed in dialogue, even narrative. See my Tuesday Tip about contractions here.

Example of stilted dialogue that lacks emotion or flow. Re-read it with contractions and see how much better it sounds.

Sometimes it’s not what your characters say, it’s how they say it. Did they ask, whisper, grunt, shout, bark?

There’s a lot going around the internet about removing almost all dialogue tags. Really, I think some of this advice is going too far. Just stick to said and asked for the most part and use other tags sparingly. Use variances from time to time to spice up your writing, but make sure they make sense.

Hissing is a sibilant sound. Do you see an “s” in the above example. Exactly.

If you chose the right words, the reader will know how he said it. Adverbs can make dialogue redundant and kill subtlety.

The word need and now (and the exclamation mark) shows the urgency.

Use Gestures and Actions

Accompany dialogue with gestures and actions to help readers know who is talking as well as make the scene less static. Again don’t go too far with this either. Actions should be meaningful. Maybe an action is used to show a character feels something contradictory from what he says.

Now that you’ve fixed your verbiage, you need to make sure it is formatted correctly. Once you’ve decided on your tags, it’s very important to put periods, commas, and capitals in the right places. Even though we haven’t gotten to grammar yet, here is a website that talks about dialogue punctuation.

Too Much or Not Enough

There is no set percentage or rule stating how much of a book should be dialogue.

Rule of Thumb: A good book has a balance of narrative, action, and dialogue. 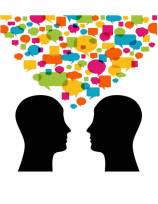 Too much dialogue can give the same impact as two floating heads talking back and forth with no background, no setting, and no actions like those two people on PBS that spell words back and forth.

It’s important to strike a balance between narrative, action, and dialogue. You probably aren’t if:

Dialogue is probably one of the biggest challenges for writers. I know it is for me. What do you think about dialogue. What are some tricks you’ve used?