Just had to share this post from my sister’s blog. Being twins and all we have a lot in common, so I definitely agree with her thoughts on this subject. What do you guys think? Is there a little too much emphasis on the ME in Media? 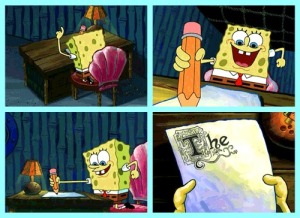 This sums up my writing efforts this month

Living in the Northern hemisphere has its perks, one of which is changing seasons, which is also one of the downfalls especially when the seasons seem to change within seasons. We had a 60 degree day and a 15 degree day back to back. Even though spring is next week, the winter season is still going strong, which means so is cold and flu season. I tried to avoid getting sick by drinking tea and Emergen-C, taking multi vitamins, and eating soup and oatmeal regularly, but sometimes I think lightning is going to strike you no matter what.

When I get sick, I commit to it. I’ve been fighting a cough and cold for at least a month. I blame it on the bad weather. I have no energy to get up, work, stand, even watch tv. Needless to say, I have no energy to write. This cold has all but put a freeze on my writing. Writing requires focus, and my brain is so foggy, I feel like I need to defrost it before I can think.

Hot and Cold together are too Intense. Sorry, Olaf

Despite being sick I have tried to maintain my writing and my blogs. I consider it a good day if I turn on my laptop, a great day if I manage to open a writing document. Most days my laptop sits closed in front of me while I try to muster the energy to hit the power button or while I try to figure out how I can type while wearing gloves and cocooned in blankets.

Looking back, I should have been trying to find the hours of the day where I was the most productive or finding a balance between rest and work, but my habit when I’m sick is usually to either do less than nothing or overwork myself.

While I wait for this cold to run its course, I’ll just keep repeating my mantra: Spring is coming… 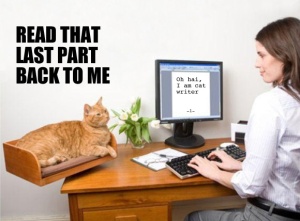 I write with cats, two to be precise; their names are Mowis and Xena (full name Xena Warrior Princess). With that being said, I’m sure you imagine a woman with a typewriter, sipping tea, one cat perched on the end of a desk and another asleep in the her lap. Quaint, but anyone who has cats knows there are a few downfalls to writing with creatures of the four-legged variety.

I always imagined I would write while my cats slept beside me, on the couch, or in their designated sleeping areas. (The only space I’ve been able to designate is where they eat and where that food goes once it’s digested.) It doesn’t matter where I write, one sits on me or my laptop while the other sits on my mouse. Both positions are super effective against writing. Moving a cat once they are comfortable is more difficult than breaking out of a Full Nelson. While I write, I don’t find their proximity soothing or companionable. If anything, I feel like they are breathing down my neck as their marble-glass eyes seem to be reading everything I type.

Which brings me to my next point: cats are critics.

When it comes to writing, my cats are more like critics than companions. Sometimes I think the physical blocking of my mouse or laptop is the only way they can keep me from doing something that they feel is a waste of time. When they meow, I hear, “Give up, you talentless hoomanz!” I don’t escape cat criticism when I go to my sister’s house either because she has two cats as well. Her cat, Mr. Beefy, once shredded writing that I gave her to edit. If that isn’t a flame review, I don’t know what is.

And if they can’t stop you they will correct you. Cats are editors.

Grammar, syntax, spelling, there’s nothing a cat won’t correct-butcher. My cats walk across the keys constantly, adding letters, deleting text, sometimes entire paragraphs of writing that wasn’t catworthy. Why else would they walk on a keyboard? Cats are known to dislike texture under their paws. It can only be to edit, and their edits are brutal. Where you simply needed an apostrophe, they insert a catastrophe.

This next one goes without saying: cats have claws.

While Mowis has only his back claws, Xena Warrior Princess has a full set. Sometimes when I’m writing she sticks her claws into my legs. They go through everything, even my thickest jeans; I think they could go through metal pants.

So why do I have cats? I think it’s because I fell victim to the Puss and Boots eyes, or that creative minds are just drawn to them. Some of histories greatest authors wrote with cat companions: Ernest Hemmingway, Joyce Carol Oates, Ray Bradbury, Mark Twain, and Sylvia Plath to name a few. They all have wonderful quotes about the joys of writing with cats purring in their laps. Which makes you wonder, were they great authors because they were talented, or because they had a cat critic.