I live in the real world: escape to imaginary ones–or at least that’s what it says on my twitter profile anyway. Recently I’ve spent more time in the real world than my imaginary one, which feels like being far from home. One world is filled with magic, suspense, romance, epicness, and awesomeness. The other . . . 40-hour work weeks, bills, lawyers, and other fun adult stuff. Guess which one I live in . . .

Due to the demands of the real world, I’ve either been too busy or too tired, or often a little of both to write. After working all day, running errands, paying bills, and dealing with lawyers, let’s just say I’m not in the mood to write–I could, however, go for a nap. And that’s pretty much what I’ve been doing with my free time which used to be writing time.

Life is hard, but you don’t have to adult hard. For the record, I’m not telling you to de-evolve into a state of pre-adolescence. I do not condone shirking duties, skipping work, or neglecting pets and children. Functioning in the real world is about finding things that help you cope with your problems, not finding ways to avoid them.

Writing is one way I escape from life, but since I’m not doing much of that, these are the ways I’ve been coping.

To clarify, there is a difference between being immature and childlike. I can watch cartoons while eating marshmallow cereal all I want as long as I complete my adult duties. I like to think I’m childlike because I’m positive, enjoy simple pleasures, and because I like things that are considered a little out of my age level. But I am unquestionably an adult. To be frank, I get shit done, but I make it as painless as possible.

Those are just some of the ways I take the edge off of doing adult task.

The Wonderful World of Disney

If I can’t escape to the worlds I created, I’m going to escape to the wonderful world of Disney. Lately I’ve been watching a lot of Disney movies. I grew up with these movies, but I never grew out of them.

Even if I didn’t have a six-year old son, I’d still go to the theaters with my sister to watch the latest movie. It’s not that I don’t like movies made for adults, I just don’t have the focus or energy to enjoy them or their real-world themes.

I don’t know if it’s the music or the colors, but I don’t think about my worries while I’m watching Disney movies. Not that animated characters don’t have their problems, but it’s pretty bad when you’re watching a movie and you’d trade your own problems for theirs. Save China, unite two nations, become king, free a genie, that’s nothing. Try getting my ex to pay child support. 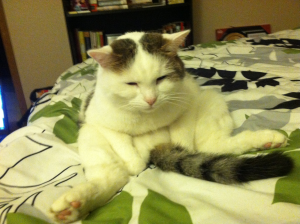 I’ve always thought the term power nap was an oxymoron. There is nothing powerful about napping. You just lay there like road kill or a potato. I’m not gonna lie, right now I need about two to three naps a day. I can’t say that I feel more rested, but I do feel less stressed, especially since I don’t nap alone. It doesn’t matter when or how often I sleep, this cat always sleeps with me, beside me, on me, under the covers, on my pillow, but always with me like a stuffed animal or a possessive boyfriend. 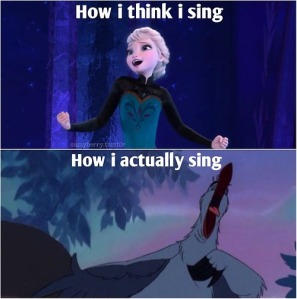 I love music. I find singing and listening to music in general to be very therapeutic. In my office, while I’m marketing, during the drive to and from work, and while I’m writing, I listen to music. My favorite music source is Pandora. My favorite stations right now are my Irish music stations, my Ellie Goulding station, and not one, but two Disney stations. Yes, I’m a little obsessed with Disney if you haven’t gathered.

Singing is stress relieving, and it’s ten times more fun when you’re belting out “Let it Go” or “I’ll make a man out of you.” Since I grew up watching these movies, I know the words by heart. It’s super nostalgic to sing “Colors of the Wind” remembering when I used to sing it while running barefoot in my back yard. Life was simpler then.

Part of being an adult is making your own choices and forming your own identity. I use to worry about being judged, and so I hid a lot about what made me well, me.

Now I don’t care what others think. I don’t have time for that. I’m 28 years old, and I have a lego Legolas at my work desk, tons of Frozen stuff (I have Frozen fever), I eat Disney princess gummies and children’s cereal, and watch cartoons. I’m not immature. On the contrary, I’m a very responsible adult. I take care of my son and help out my mom, I pay all of my bills on time, and I work hard at my job. So if I come home and snuggle with a cat on a bed that has owl pillows, that’s my prerogative.

I think we all hit this point from time to time, where our real life demands as much if not more from us than our writing. I’ve got a lot to get done before I can give my full attention to writing. Of course, I’m dreading starting again after a lapse; however, I will get back in the saddle–or for those of you who have never fallen off a horse–back on the bike. I guess my advice is don’t lose connection with the real world, but likewise, don’t lose connection with the ones you create.

And speaking of losing connection, I don’t want to lose contact with my wonderful followers. Tell me, how do you cope with the real world?

Three shall be the number thou shalt count until the end of the Kindle countdown deal, and the number of the counting shall be three. Four shalt thou not count, neither count thou two, excepting that thou then proceed to three. Five is right out. Once the number three, being the third number, be reached, then the sale ends.

If you understood that reference, The Quest for the Holy Something or Other is right up your alley. Full of wit, referential comedy, and hilarious situations, this comedic parody has a sitcom feel that fans of Seinfeld, Shrek, Galavant, and Monty Python can appreciate.

If you already have a copy, please help spread the word by telling your friends or write a review. If not, now is the time to get yours. It’s too late to get this book for 99 cents, but for another three days, it can be yours for only $1.99.

That’s THREE DAYS and then the deal ends.

Hopefully you count better than Arthur. .

If you don’t know where to find it, search not for a grail shaped beacon, follow this link to Amazon.

Thank you all for your fabulous support. I know you’ll enjoy it. For those of you who have read it, please comment below and let me know what you think of my sisseh’s book. If you’re interested in knowing what I think, stay tuned for my non-biased sister review to be posted soon.

Take that money you were going to spend in the drive-thru and get your copy of The Quest for the Holy Something or Other today for only 99 cents.

For those of you who haven’t read my sister’s debut novel, she is running a special this month. check out this post for details.